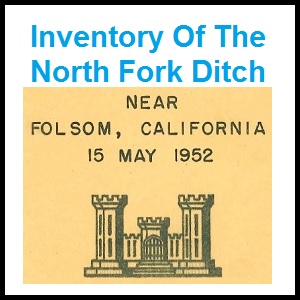 A review of the 1952 Army Corp of Engineers analysis of the North Fork Ditch and potential compensation for the loss of structures due to the inundation by Folsom Lake.

The purpose of the report was for determining the compensation to the North Fork Ditch Company for property and structures that were either to be inundated by the waters of Folsom Lake or rendered useless because water could no longer be conveyed through the ditch once the Folsom Project was completed.

Map Of North Fork Ditch To Be Abandon By Folsom Lake

When Folsom Lake water levels are low, many of the structures noted in the report can be seen. The inventory and relative placement of the structures on the Army Corp map helps identify some of the concrete structures I’ve seen out in the field. Of the approximately 22 mile portion of the North Fork Ditch to be abandon because of the Folsom Project, the majority of the flumes on the main canal occurred within the first 2.5 miles. The report listed 37 timber or metal flumes on the canal. 30 of those flumes were constructed right after the Birdsall Diversion Dam to approximately 2.5 miles downstream. The high number of flumes is indicative of the narrow upper North Fork of the American River canyon. In many places the ditch had to run up against the solid rock wall of the canyon. Only a timber constructed flume next to a nearly perpendicular rock wall face could be used. The North Fork Ditch also had to cross many steep ravines carved out by intermittent streams or creeks.

The inventory lists 4 residences, 10 sheds and 1 building. The residences were usually for the ditch tenders who needed to address issues along the canal such failures or obstructions in the canal. The sheds usually held material for repairing parts of the ditch and tools. As noted in the report, most of the North Fork Ditch was only accessible by narrow foot paths.

The report also lists 2 tunnels that I was not aware of. As you walk along the route of the North Fork Ditch remnants will suddenly disappear. Most often either the lake water or a flowing American River has washed away concrete lining or any remnants of a timber flume. The tunnels indicated on the Army Corp map show one north of Mormon Ravine and another west of Rattlesnake Bar.

U.S. Army Corp Of Engineers Map May Not Be Accurate

But I’m not 100% confident these locations are entirely accurate. For instance, the report lists Structure 85 as the Upper Mud Settler north of Mormon Ravine. There is no map indicator for Avery’s Pond, which was the largest mud settling retention pond along the North Fork Ditch, on the map. Avery’s Pond is located south of Mormon Ravine. Structure 85 is not in sequence as the inventory starts with number 1 at the Birdsall Diversion Dam and continues south toward Structure 84, the Old Hinkle Reservoir. Someone obviously realized they had left off the large mud settling pond from the map and included it as Structure 85, in between structures 49 and 50. Nevertheless, the notation of 2 tunnels gives me another reason to hike back out to the area to search for them. Portion of the Army Corp of Engineers map where I have noted the 2 tunnels, Mormon Ravine, Rattlesnake Bar, and Avery’s Pond positions. Structure 85 was called the Upper Mud Settler pond, but Avery’s Pond, which was also a mud settling pond for the North Fork Ditch, is not shown on the map.

Excerpts from the 1952 report

The main canal of the North Fork Ditch Company was constructed by the American River Water and Mining Company in 1854 for the purpose of furnishing water for hydraulic and placer mining, although a small quantity of the water was used for irrigation at the time. With the cessation of hydraulic mining, the canal fell into disuse and in 1887 it was acquired by C.W. Clark, A.N. Buchanan and H.C. Smith, who were the first to attempt to use this as an irrigation project on a larger scale. In September 1899 these parties conveyed the major portion of their rights, title and interest in the property to the North Fork Ditch Company which was incorporated on July 8, 1899, under the laws of California. In 1914, this company acquired the balance of the properties. The Public Utilities Commission allowed $50,000 as the purchase price as a basis for historic cost. Subsequently the Company expanded its facilities and now supplies water mainly for irrigation purposes, through a system of ditches, reservoirs and pipelines, to nearly 200 retail customers and three wholesale customers consisting of the Fair Oaks Irrigation District, Citrus Height Irrigation District, both public corporations; and Orangevale Water Company, a mutual organization. The area served consists of some 15,000 acres of orchards and crop lands, some portions of which are presently being subdivided for housing areas. In June of 1948, the North Fork Ditch Company properties, business and water rights complete, were put up for sale through the brokerage firm of Stone and Youngberg of San Francisco, for the sum of $450,000. The highest offer received by the firm, in the amount of $385,000 was made by the three above-mentioned wholesale customers who at the time were interested in purchasing the water system, rights and title, as a joint venture. However, this offer was turned down and it is reported that the brokerage firm (who held an option on the North Fork Ditch Company) indicated that it would have to get over $400,000 to realize any profit. As no further agreements could be reached, the negotiations were discontinued. At the time, the historic cost of the entire system, as carried on the Company’s books for rate making purposes, was in the neighborhood of $720,000.

The Company claims an established right to the first 60 c.f.s. (cubic feet per second) of flow, in the North Fork of the American River, which according to reports by the Public Utilities Commission was granted the Company in a superior court decision after litigation proceedings in 1898. The decision, accordingly was based on the prior rights of the parent company. The Company has since been granted an additional diversion right of 35 c.f.s. However, as the Company’s present facilities are not as yet adequate for handling the additional 35 c.f.s., the Company has not as yet established that right in accordance with existing Water Code Regulations of the State of California.

The water for the system is obtained by diversion from the North Fork of the American River, approximately 2 miles southeast of the city of Auburn, Placer County, California. The present diversion dam, which was constructed of masonry in 1898 after several previous timber and rubble dams had washed out, appears to be sound. The main canal is about 25 miles in length, extending from the diversion dam to the Penstock Reservoir (corner of Oak Avenue and Santa Juanita Avenue). A large portion of the canal is either completely or partially lined on the inside with a thin layer of concrete, some of which is new but a large percentage would require replacement within the next ten years. The canal system contains some 32 timber flumes, 5 metal flumes, 4 concrete bridges, 50 timber bridges, 32 wasteways, several old buildings and dwellings, 2 tunnels, telephone line, and numerous other miscellaneous structures. With the exception of the dam, concrete bridges and many of the concrete wasteways, most of the above listed structures would require replacement within the next ten years. Access to the first 18 miles of canal can be gained over difficult roads and only at points varying up to 3 miles apart. Only narrow foot trails exist between these points, resulting in excessive costs for maintenance, repairs or replacement of structures along that portion of the canal. The first lateral (Rose Spring Lateral) takes off from a point approximately 21 miles from the diversion dam. The canal continues from there, tying into the Old Hinkle Reservoir at approximately 22.5 miles from the diversion dam and then continues a short distance to Baldwin and Penstock Reservoirs, from which a system of laterals and pipelines complete the distribution. At present the canal has a maximum capacity of approximately 70 c.f.s. at the head and gradually decreases in cross section, in keeping with wasteways, turnouts, and losses in transit, to a capacity at the first lateral probably not in excess of 60 c.f.s. Occasional flow measurements made by this office indicate that the flow at that point is generally closer to 55 c.f.s.

The Army Corp report goes through several evaluation scenarios to determine the fair market compensation that should be paid to the North Fork Ditch Company for the loss of their canal and structures to be inundated by Folsom Lake. The analysis determined that the age of the facilities, depreciation, and increased maintenance costs actually rendered a negative value for the North Fork Ditch structures. Because the Folsom Project called for supplying the same amount of water from Folsom Lake to the New Hinkle Reservoir, essentially replacing the canal and structures that were to be abandon, the existing facilities to be abandon were economically obsolete.

In view of the fact that nowhere, in the findings of this report, can it be shown that the Company will suffer any loss or damages in net earnings or market value, as a result of the modification of its facilities, but as it has been shown instead that the Company will benefit substantially therefrom, it is therefore recommended that the transfer to the Company, of the substitute facilities together with an established flow of water near the point of severance, be considered as full compensation to the Company for its loss of the abandon facilities.

1954 the San Juan Suburban Water District was formed by a vote residents within the boundaries of the new water district. In that same year, the North Fork Ditch Company entered into an agreement with the federal government acknowledged their water rights and construction of structures to deliver the water from Folsom Dam to the New Hinkle Reservoir. While the North Fork Ditch may have been obsolete and decrepit, its water flow in the late 19th century into the mid-20th century helped northeast Sacramento County and parts of southern Placer County bloom with orchards, crops, and eventually suburban tract homes.

Normally, I include documents I am referencing with the post. This document happens to be over 32 MB in size. If you would like a copy, contact me and we can make arrangement for me to get it to you electronically.