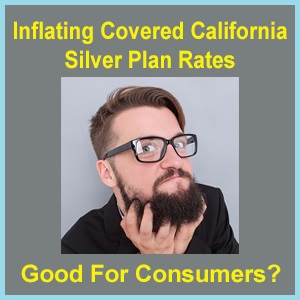 Covered California will allow health plans to inflate Silver plan rates to fund Enhanced Silver Cost-Sharing Reductions if they are not funded by the federal government in 2018.

The Covered California Board approved a resolution on June 15th to allow health insurance companies to artificially inflate their Silver plan rates in order to cover the cost of Cost-Sharing Reductions. The Cost-Sharing Reduction may be ended by the Trump Administration for the 2018 plan year. Artificially inflating the Silver plan rates, which will increase the monthly tax credit subsidy, will influence consumer behavior leading more consumers to select either a high deductible Bronze plan since those plans will become less expensive with the increased tax credit.

Because of the uncertainty regarding the future of the ACA or any possible replacement for it from congress, Covered California has authorized the health plans to file two separate rates for their Silver plan offerings. One set of rates would reflect the status quo where the federal government will continue to pay them for the CSRs. The other rates would reflect an increase in the Silver plan rates necessary to cover the loss of funding for the CSRs. Analysis by Covered California determined the Silver plan rates would have to be increased 15% to 20% to cover the cost of the CSRs.

Tax Credit Subsides Rise For Everyone

As Covered California states in their documents, consumers enrolled in Silver plans that are artificially inflated to cover the CSRs should realize little adverse financial impact because the monthly subsidy would also increase. The monthly Advance Premium Tax Credit is calculated on the Second Lowest Cost Silver Plan (SLCSP) for the household. The tax credit subsidy calculated on the SLCSP can be applied to any metal tier plan: Bronze, Silver, Gold or Platinum. If the SLCSP increases, everyone gets a larger monthly subsidy regardless of which metal tier plan they have chosen. This also means that the federal government will be on the hook for paying out more the Premium Tax Credit, either monthly or when consumers complete their federal tax return.

What Plan Will Families Select?

As a Certified Insurance Agent for Covered California, I hear economic concerns and considerations directly from consumers weighing which metal tier plan they should select based on the monthly subsidy they have been determined eligible for from Covered California. I also tell clients that if they are offered an enhanced Silver plan 73, 87, or 94, they should seriously consider it. The Silver 87 and 94 are actuarially better than Gold 80 or Platinum 90 plan at a lower rate. Similarly, they should consider an enhanced Silver plan over a Bronze plan even though they will be paying more. This logic doesn’t always resonate with every consumer.

For those consumers who are eligible for an enhanced Silver plan, even if the rates are inflated, they most likely will stick with the plan because the tax credit subsidy increases as well. But for consumers receiving very little or no tax credit, the decision will be to either to apply the larger subsidy to a Bronze plan or pay a little more for a Gold plan with no deductible. For individuals and families who rarely use their health insurance because they have no current chronic health conditions, I can see people selecting a lower monthly cost Bronze plan. It’s possible that many people, because of the increase subsidy, will see Bronze metal tier plans at below $10 per month and will opt for the least out-of-pocket cost.

Health insurance companies that participate in Covered California must offer the exact same plans off-exchange at the exact same rates. Without some sort of intervention, this poses a real shock to off-exchange consumer, those who buy their health insurance directly from the health insurance company, if something isn’t done. Covered California is working with the health plans to offer a slightly different version of their standard benefit design Silver plan. These closely mirrored health plans would not be subject to the inflated rates necessary to fund the CSRs.

Both Covered California and the off-exchange plans will have a head ache come renewal season. To make life easier, health insurance companies and Covered California automatically renew a member’s health plan for the next year. It will require a massive amount of communication to alert consumers that if they don’t want the artificially inflated Silver plan, they need to change plans. Invariably, there will be thousands of people who get a massive rate increase for January 2018 with a new Silver plan that they didn’t expect.

Covered California has carefully laid out their legal justifications and authority for implementing inflated Silver plan rates to cover the CSRs. It’s great that they are trying to be proactive to preserve the reduced cost-sharing benefits for individuals and families who qualify for them. One gray area is the Medical Loss Ratio which stipulates that health plans must spend 80% of their premium revenue on member health care services and quality improvement. It is also noted that the individual and family plan market is one large risk pool. Consequently, the CSR subsidies are technically going to health care services.

Is It Fair To Make People Pay For Low Income Subsidies?

But how does an enrolled individual in a standard Silver 70 plan, who is not eligible for the CSRs, feel about subsidizing lower income plan members? Could the argument be made that some individuals are paying an inflated premium, close to a Gold plan, but only receiving Silver plan level benefits? At a very minimum, the inflated Silver plan rates are a distortion of the health insurance market place. One of the goals of the ACA and the exchanges like Covered California was to bring more transparency and accountability to the health plan selection process for consumers. If the inflated Silver plan rates, along with artificially inflated subsidies, do become a reality, the market place for health insurance will take a step backwards as plan selection becomes more confusing for consumers.

Covered California Board Documents for June 2017