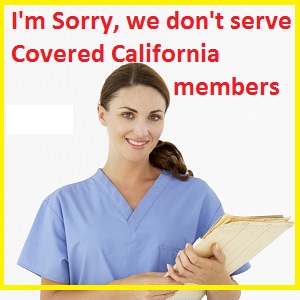 Even when an individual is denied service or has his or her Covered California health plan rejected, most consumers are reluctant to file a complaint. They are afraid their complaint will become known to the doctor and then the doctor will refuse to see them even on a cash-payment basis. In October, I did have one client who wanted to push the issue as he felt he was being unfairly discriminated against.

Blue Shield use to educate doctors

Back in 2015, I was told that Blue Shield took the issue of doctors not accepting Covered California plans seriously. I received the card of a Blue Shield employee who was the Operations Management Supervisor. She said it was her job to contact doctors who were refusing to accept Covered California health plans and educate them about Blue Shield’s provider obligations. I called the number on the card and was informed that the telephone number was no longer in use. I then sent the information on the doctors to Blue Shield’s Provider Information and Enrollment Services department. I received the following reply.

This is in response to your recent inquiry received 10.27.16, regarding Dr. ABC MD and Dr. XYZ MD being on file with Blue Shield of California as contracted PPO providers with the Covered California networks not accepting members. We do show these doctors as accepting new members but this request has to come from our customer service department so we can contact the doctor’s office for breach in their contract. You would need to call the number on the back of your members card and tell them this so that they can contact our department here in contracting. If you have any further questions please feel free to contact our department phone number or email below.

It was obvious to me that something over the last year had changed at Blue Shield. They went from wanting to aggressively educated doctors about not discriminating against Covered California members to shrugging their shoulders over such complaints. They did say that the information was noted and that they did have other complaints about one of the doctors already on file about his refusal to accept Covered California health insurance.

Providers agree to deliver quality medical services that are cost-effective and meet prevailing community standards. In the delivery of health care services, providers do not discriminate against any person because of race, color, national origin, religion, sex, sexual orientation, disability, physical handicap, or available benefits. Providers seek to educate and encourage subscribers to follow health practices that improve their lifestyle and well being. Section 2, Page 3, July 2016

One Individual and Family Network

As it has been explained to me, Blue Shield, and many of the other carriers, have one Individual and Family Plans (IFP) network of providers. Regardless of whether the plan was purchased directly with the carrier, off-exchange, or through Covered California the IFP network is the same. A search on any of the carrier’s online provider search tools also confirms this. (The provider online search tools can be confusing and complicated.) As for Blue Shield, the main selection is 2016 Individual and Family PPO Plan (including Covered California). There is no differentiation between an off-exchange plan and one purchased through Covered California.

Blue Shield online provider search tool does not differentiate between off-exchange plans or those purchased through Covered California.

Why would a doctor discriminate against Covered California?

So why would a doctor accept an off-exchange plan over a Covered California plan? The rational I have heard most often is to reduce their exposure to unpaid services. Most Covered California individuals and families are receiving a hefty subsidy to reduce their monthly health insurance plan premium. The logic is that if a consumer can afford to pay the full premium amount for an off-exchange plan, they have a higher probability of paying for their office visit and any services rendered by the doctor at the time of the visit.

A patient with a Bronze plan, with a medical deductible of $6,000, may be responsible for the full negotiated rate of any services provided by the doctor. In other words, unless the health plan member had met the high deductible, they would have to pay the full amount for any number of services the doctor may provide during the office visit. If the patient is receiving a subsidy from Covered California, they may not have the cash to pay for those services. This means the doctor may not be able to collect for the services provided.

This leads doctors to only accepting Covered California Gold and Platinum plans that have no deductible. What the doctors may not be aware of is the number of individuals who qualify for Enhanced Silver plans with cost sharing reductions. An individual with a Silver 94 plan, actuarially better than a Platinum 90 plan, have deductible of $75, office visits of $5, and 10% coinsurance. People with an Enhanced Silver plan may be in a better position to meet their health care services payment obligations than those folks paying the full premium amount for a Silver 70 plan.

Send the patient to an out-of-network location

Blue Shield, you are better than this

If Blue Shield has really decided to allow their contracted doctors to discriminate against Covered California health plan members, they should openly state it on their website. They should tell the consuming public that they have granted the right to doctors to make a value judgement on the worth of their members based on whether they enrolled directly with Blue Shield or through Covered California. If they are going to allow discrimination to be practiced, they should have to alert consumers to that fact.