For individuals and families considering Covered California for health insurance, they will want to consult the 2023 income chart for eligibility for the different programs. The latest Covered California 2023 Open Enrollment Income Chart will be applicable through March 2023 when new federal poverty levels are implemented.

For many people, the Covered California income chart has been a moving target. The annual income figures change during the year and if you do not refer to the most recent iteration, the eligibility results can be confusing.

The income chart uses columns with specific percentages to display the annual income amounts necessary for different program eligibilities based on household size, rows. What can be confusing is that an income chart will be published where the math doesn’t work. For example, the federal poverty level (FPL) income for an individual is the 100% column. The next column is 138% FPL. On the 03/2022 income chart, the annual income amount in the 138% FPL column, $18,755, is higher than the 100% column of $12,880 x 1.38 = $17,774.

In March, the new 2023 FPLs will be updated on the Covered California income chart. The columns that were mathematically aligned during Open Enrollment, will be higher. Enrollments after the 2023 FPL update, and changes reported to Covered California applications, will be subject to the higher Medi-Cal income numbers. However, the other columns, such as the range for the enhanced Silver plans, will stay the same based on the 2022 FPL income amounts.

A consumer’s Covered California estimated income will rollover from 2022 to 2023, unless the consumer updates the amount. The 2023 Open Enrollment income chart will be applied to existing applications that are being renewed. If the current income for a single adult is $18,500, that individual will be considered eligible for Medi-Cal because the current income amount for eligibility for the subsidies is $18,756. Households whose 2022 income drops below 266% FPL during the 2023 renewal period will have any dependents determined pending Medi-Cal. 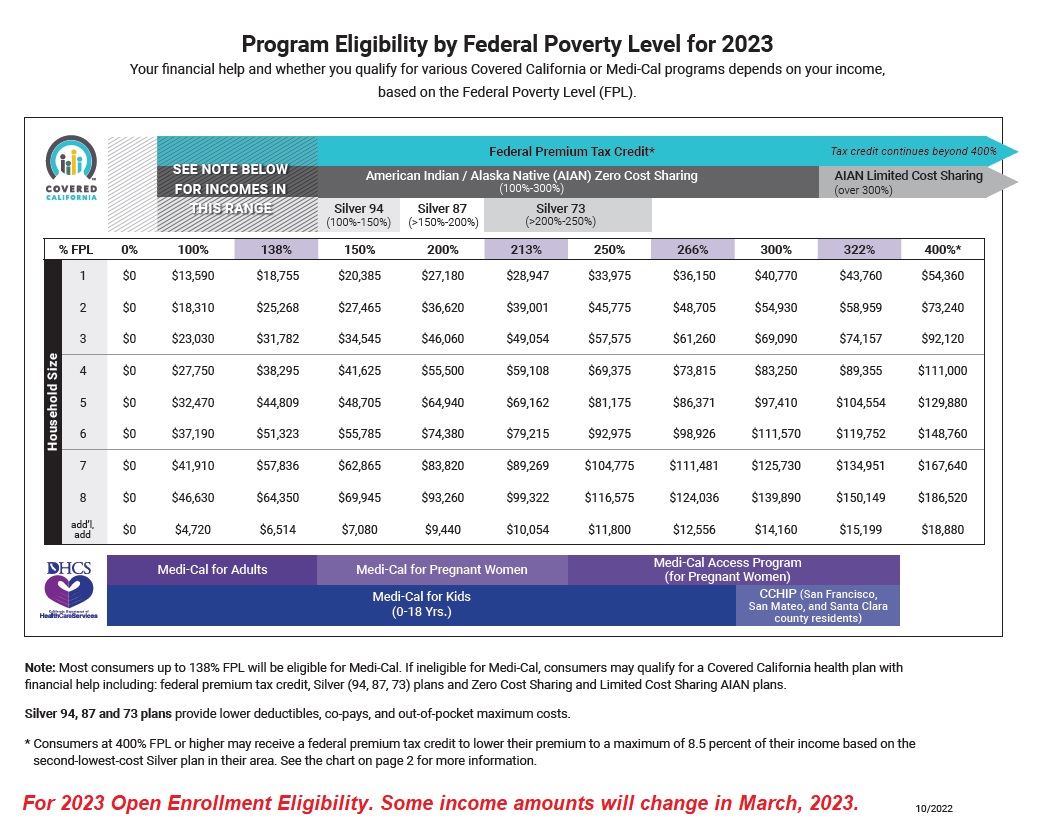