Even before Folsom Lake Dam was built and the reservoir filled, the north fork of the American River was supplying water to communities, farms and ranches in south Placer and northeast Sacramento counties. I recently found aerial photography from 1952 showing a free flowing north and south fork of the American River. Finally, I can see the routes the early gold miners traveled, the outline of the Sacramento, Placer & Nevada Railroad, and North Fork Ditch that helped supply water to the suburban communities of Orangevale, Citrus Heights, and Fair Oaks.

Even with Folsom Lake at historically low water levels in the winter of 2013 it was still hard to discern the actual path and topography of the rivers as you got closer to the dam. The 1952 aerial photography shows the steep slope of an area called Rattlesnake Point on a 1954 US Geological topographical map. Rattlesnake Point just north of Beals Bar, at the confluence of the north and south fork of the American Rivers, has an elevation drop of one hundred feet over approximately three hundred feet going down to the river. The shadow in the aerial image gives a feel for the steep slope of the river bank as opposed to the elevation lines on a topo map. Tracing the path of gold miners

Each one started with a load strapped to his back or otherwise carrying what he could; and by a path leading up the steep hill-side, we ascended leisurely until the summit was reached, after which the way was almost level. There was an unbroken forest of stately trees, mostly pines, the entire distance. An hour’s walk brought us in sight of the valley of the North Fork, when by a precipitous path, we descended to the camp of our friends. – Page 272 – 273, Experiences of a Forty-Niner by Wm. G. Johnston, 1892 Illustration of the North Fork Mining Camp on the American River from Experiences of a Forty-Niner by Johnston.

The hill they climbed up was probably Negro Hill as designated on the 1954 topo map (see topo map image at end of post). The peninsula, as it is known today between the north and south fork of the American Rivers, is relatively flat and easy to walk. An hour long walk could have put Johnston’s party across from today’s Granite Beach State Park. Of course, his recollection was written forty-three years after the his youthful adventure so it might not be entirely accurate. However, the North Fork flowed in an east to west direction around Massachusetts Flat and that might be the location where Johnston recalls seeing the “valley of the North Fork”.

Johnston returns to the mining camp after initially leaving for the winter when he receives word that one of his companions has died. In trying to locate the grave of George Reppert, I hiked along the low water of Folsom Lake around the Peninsula Campground. The aerial images of the North Fork lead me to believe that the mining camp and burial spot that Johnston refers to is probably further south and most likely covered with lake water even at its lowest drought levels. (You can read more about my search for grave site in Searching for George Reppert’s Grave).

Captured in 1952, the aerial image shows Folsom Dam construction under way. Directly south of the confluence of the American Rivers the river flow has been diverted into a tunnel and under where the main concrete structure of the dam would be completed. South of Beals Point State Park, the old North Fork Ditch reservoir has been filled in and on the western side of the Folsom wing dam you can see the new Hinkle reservoir. Hinkle is the holding reservoir for the treated water that ultimately is distributed by the San Juan Water District to south Placer and northeast Sacramento county communities. (Learn more about the North Fork Ditch at Riding and Hiking the North Fork Ditch Trail).

In the more detailed image the North Fork Ditch (NFD), first constructed in the 1850’s, can be seen winding its way parallel to the north fork of the American River. At times the NFD was half a mile or more away from the main river channel as it had to follow an elevation line that would maintain a constant elevation drop to allow the water to flow at a regular rate. At this point the NFD is at 410 foot elevation while the river channel is at approximately 230 foot elevation. Maximum Folsom Lake height is at 466 foot elevation.

Path of an old railroad line

If you look closely, which I’ve outlined to the side in green, is the smaller spur water ditch known as the Allen Ditch. The Allen Ditch came off the main line of the NFD and serviced mining operations and farms to the west and north. We also know that the Sacramento Placer & Nevada Railroad (SP&PRR) ran their line west of the American River and for a time paralleled the Allen Ditch. Again, if you look closely, you’ll see the dirt path, not an official road on most maps, that I believe is the original railroad grade for the SP&NRR. (Learn more about the SP&PRR at Sacramento, Placer & Nevada Railroad). 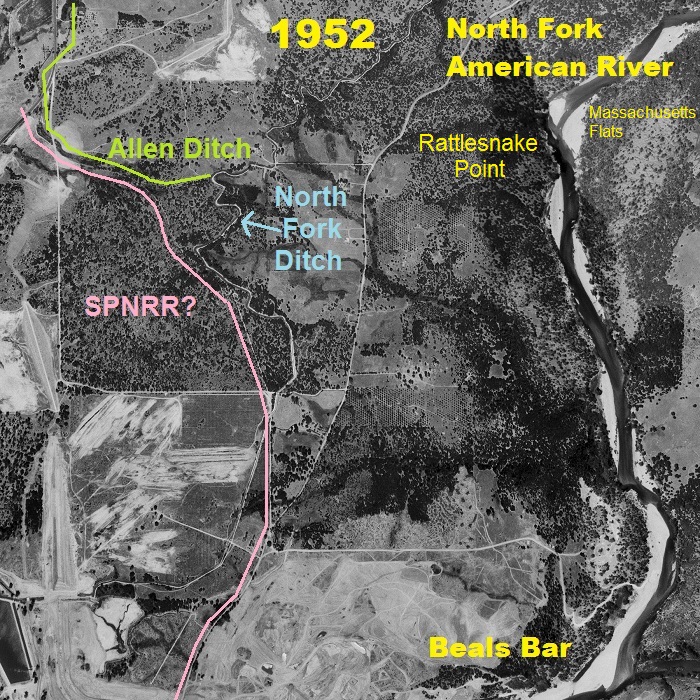 The dam before Folsom diverting water into the thirty-three mile North Fork Ditch which wound its way from Auburn down to just north of Sacramento County. (To learn more about Birdsall dam visit: Hiking down to Birdsall Dam). By today’s rules and regulations, the Birdsall Dam that diverted up to 3,000 miners inches of North American River flow beginning in 1858 would be declared illegal. (A miner’s inch equals 1.5 cubic feet per minute, 11.22 gallons per minute for a total of 33,660 gallons per minute). This is in addition to environmental considerations where the dam prevented any upstream migration of salmon or ignoring the Native American claims to any water use for their historical way of life along the river.

Regardless of the history, the original NFD and subsequent water allotments afforded by the construction of Folsom Dam allowed northeast Sacramento and southern Placer counties to develop from agriculture to suburban housing. The communities of Granite Bay and Orangevale are virtually dependent on the water supplied by the San Juan Water District that got its start from the NFD.

The old river bed, even if exposed by a drought depleted Folsom Lake, is thoroughly silted over at this point. But at least looking at the 1952 aerial photos of the American Rivers before they were covered with the lake, avails a small glimpse into what the first gold prospectors and Native Americans saw when the American Rivers ran free. Some folks might also be able to discern the old family farm or ranch that now primarily rests under the waters of Folsom Lake in the aerial images.