Hiking along the Feather River Diversion Pool looking for historical remnants of the Golden Feather and Golden Gate dams, canals and flumes from the 1890’s.

Virtually all visible signs of two dams on the Feather River along with thousands of feet of wooden flume and rock wall canal built in the 1890’s are hidden under the waters of the succeeding water project of Thermalito Lake in Oroville. Nonetheless, I was still drawn, like any amateur historian; to retrace the route of the Golden Gate and Golden Feather Mining Claim’s successful attempt to dewater almost two miles of the Feather River in search of gold. While I didn’t see any history from the 19th century, the Brad Freeman Trail I was hiking on was the abandon railroad grade of the Western Pacific Railroad (WPRR) from the 20th century. Western Pacific Railroad Feather River Line

The old WPRR grade along Thermalito Lake is nice and level and includes a lighted, curved railroad tunnel you get to hike through. Actually finding the trail on the south side of the lake can be a challenge. You have to wind your way through different rural roads to find the gravel parking lot. A short hike from the parking area puts you just north of where the Union Pacific Railroad tracks cross Thermalito lake. (The Feather River railroad line was changed when Oroville Dam was constructed. The railroad detoured over the Thermalito Lake and around South Table Mountain before uniting back with the original line in the Feather River Canyon).

After passing through the train tunnel built in 1911, the Brad Freeman Trail is generally straight and level. The trail landscape alternates between the high banks of railroad cuts to being on top of a levee that separates two bodies of water. Originally, the railroad would have had wooden trestle bridges across a couple of the creeks that drained into the Feather River from the southern hills. It appears the bridges were replaced with fill dirt by the construction of the Thermalito Diversion Pool below Oroville Dam by the state. Moderate size ponds of water lie on the south side of the trail while Thermalito Lake runs the length of the trail on the north side.

Oroville Dam looms at the end of the trail

You can take the trail all the way to Oroville dam. I detoured over the naked bed rock to a point opposite the great concrete spillway of Lake Oroville. There are Panoramio photos of water cascading down the spillway which can also be found on Google Earth. That would be a sight to see, but on this hot July afternoon in the midst of a four year drought, I doubted that I would see any water cresting over Oroville dam anytime soon.

Looking for history of long forgotten dams, canals, and flumes

My mission was to spot remnants of the Golden Feather Mining Company’s two dams, flumes, and canal built in in 1890 to move the Feather River out of its natural course to mine for gold. I initially wrote about the big Feather River diversion project 1895 Feather River diversion for gold mining when I stumbled across an old Harper’s Weekly story about the historic undertaking. On my hike I didn’t find any traces of the great enterprise to dewater the Feather River, but I experience the same landscape as the miners from over 100 years ago. Particularly, South Table Mountain is a clear landmark that shows up in photographs of the construction of the dams and flumes.

Thermalito Diversion Pool or lake is part of another great water project – California State Water Project. Thermalito Dam regulates the water flow both downstream in the Feather River from releases from Lake Oroville and diverts water into a canal for the Thermalito Afterbay. Its construction permanently covered the remnants of the 1890 diversion project contracted by the Golden Feather Mining Company and funded by investors from the United Kingdom.

Railroad tunnel was a pleasant surprise

My midday July hike was a round trip of seven miles. It was mostly pleasant, except for the heat. It’s fun to hike along the old railroad grade knowing that there was so much human activity between building dams, flumes, canals, and railroad tunnels more than a century before I stepped on the dirt path. The Thermalito diversion dam, the Union Pacific tracks that cross the lake, the calm water framed by hills, the WPRR train tunnel, and the Oroville Dam spillway are all impressive in themselves. But it still would have been mesmerizing to catch glimpses of the water project that preceded today’s engineering feats. 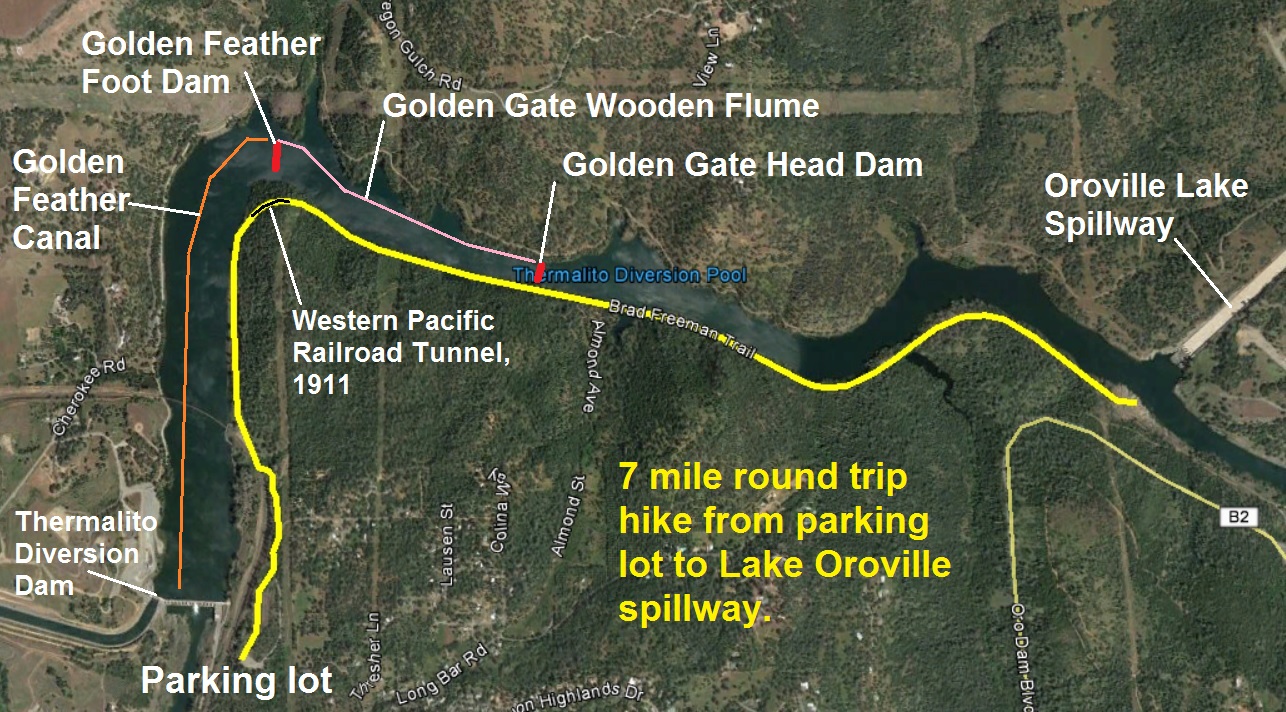 North on Washington Blvd, Hwy 162, right on Orange Avenue before you cross the Feather River. Left on Long Bar and left on Colina Way. Travel north, turn left on Lakeland Blvd. You’ll pass through a gate at the end of Lakeland and the road goes from paved to gravel. It makes a big loop and there are signs directing you to the parking lot along the way.