Riding the Placerville and Sacramento Valley Railroad in Folsom, Ca.

On a warm autumn October day the Placerville and Sacramento Valley Railroad (PSVRR) ran special short excision train trips for members of the Southern Pacific Historical and Technical Society. I was fortunate enough to be a guest and document the day’s activities. Just as the original railroad grade was cut by hand in the 1860’s, there are numerous volunteers that expend real physical labor to keep this historic rail line in operation. Video and photo gallery below.

Members of the Southern Pacific Historical and Technical Society were in town for their annual convention and the PSVRR train trips was a little icing on the railroading activities. Folks boarded the observation car at Hampton Station, which happens to be right across the street from the Hampton Suites in Folsom on Placerville Road. Through what always seems to be typical bureaucratic hurdles, the excursion trips were limited to a short distance up the line to the intersection with White Rock Road. But when you are a rail fan, a short train trip is better than no rail ride at all. (PSVRR Excursion and Holiday Trains)

Travel back in time on the Placerville and Sacramento Valley Railroad

The section of rail line from Hampton Station to White Rock Road is relatively unmolested by development. You see the wide open savannah grass lands or prairies. The grade cuts in the dirt and bedrock look as if they could have been dug just a few years ago. The rolling foothills, golden grass lands, and the green patch of White Rock Springs have probably changed very little from the 19th century when the PSVRR was running steam engines. (History of the PSVRR)

A day on the Placerville and Sacramento Valley Railroad

A series of short recordings of different events and activities through the day, October 5, 2015 on the Placerville and Sacramento Valley Railroad.

The wide open expanse of the prairie land south of Highway 50 is a stark contrast to the suburban development of East Bidwell Street or the wooded portion of the rail line along Willow Creek. As you pass through these different environments you get a real sense of how the landscape was when the train tracks were laid and how we’ve evolved in the 21st century with automobile centric transportation priorities. 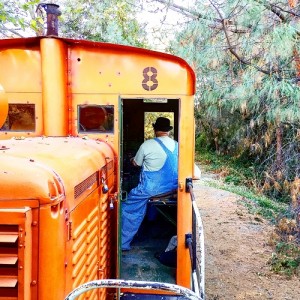 Engineer Al drives the Howard #8 along the Placerville and Sacramento Valley Railroad.

Operating a train is not only old school, it is old world. The workload is actually heavier today than when the train was in commercial operation because of the lack of crossing arms, bells and flashing red lights at the various intersections. The lack modern train traffic control is supplemented with a choreographed dance of volunteers stopping traffic at each intersection so the train can safely cross. In an odd bit of irony, the traffic flaggers drive ahead the train in their cars to be in position at the interaction. Once the train has passed they take the surface streets to the next intersection. Since the train only travels about 7 miles per hour, the traffic controllers can usually beat the train to the crossing.

The conductor on this run was Vice President of the PSVRR Eric Olds. He was choreographing the entire dance. Eric had his eyes on everything and his ears tuned to his fellow train engineer, brakeman, and traffic control volunteers. This vigilance is necessary because no one understands that this is still an active railroad. Consequently, Eric and the other volunteers were constantly gauging the hazards presented by temporary fencing installed right next to the rail line or the huge mounds of chipped bark virtually spilling onto the tracks that was left by a public works department. Morning inspection and preparation for the day’s run on the Folsom railroad tracks.

There is a good working chemistry between PSVRR President Jim Harville, Eric Olds and the rest of the volunteers. Jim was part of the vanguard traffic control group hoping from intersection to intersection. Their love for this railroad and the history behind it is palpable. Their enthusiasm and knowledge just bubbles over in the most effusive manner.

Not everyone understands the value of this community asset

I was a guest because someone noticed that I try to research and write about local history and the California Central Railroad that ran from Folsom to Roseville. But this crew has me beat for their dedication and knowledge of history. I can’t see how anyone, after spending a few hours with the PSVRR volunteers, could ever conceive of abandoning this line and ripping up the rails. Unfortunately, there are some folks in the community and political circles that don’t value the PSVRR as a community asset.

I’ll be the first to admit that suburban shopping malls and housing developments don’t always mix well with the quirks of running a railroad. Trains can be noisy, inconvenient, and if you’re not careful, dangerous. I’m also not one to romanticize train travel. You either like it or you don’t. But I’ve also been approached by too many people who ask me, “Where did the old California Central Railroad line run?” The Howard #8 pushes the rolling stock of the Placerville and Sacramento Valley Railroad back to the yard in Folsom.

From a historical and community identity perspective, it is far more powerful to see the rails than to look at an old picture. Even the power of the Internet can only go so far in recreating the experience of riding on a train or watching one pass. The PSVRR has a developed a good community outreach program by offering holiday excursion trips and regular breakfast runs to Latrobe.

History being made, names will be remembered

There is no reason why the PSVRR can’t become embedded in the fabric of the community on several different levels such as history in the local schools or regional tourist attraction. We are watching history being made. Railroads have always been a tough business proposition. It is no less so even for this specialty operation. But it looks like the PSVRR has a good chance of sticking around and growing over the next couple of years.